Maples Cemetery is a new development to my favorite MsStorian Adventure. Star and Tribune
history column contributor, Curtis Brown, discovered my research on the Wealthwood Black/Strader Cemetery in February. He contacted me, conducted a phone interview, and then wrote an article in early March.

The article led to a new discovery for me, the location of a second cemetery of Black Wealthwood settlers. A few hours after the Brown article was published, I received a call from a Mr. Workman who lives on land previously owned by the Black Civil War veterans. Workman said he “had to share some information with me. His driveway was just across the road from what he called Maples Cemetery. He offered to lead me there the following weekend. The lure of a fresh lead was too great to pass up, even with COVID 19 still raging in the Northland.

The following Saturday morning, I deputized my husband “MsStorian for the Day” and plugged
Workman’s address into my phone Map Quest. I have to admit I was pretty pumped at the prospect of the second cemetery. A 2016 contact indicated he saw a few additional graves as a youth, but couldn’t remember where they were. “Just in the woods somewhere” is all he said. Workman met me just before the turnoff.

He is long time resident of the area and military veteran who has spent over six decades trapsing through the woods. He remembered a few stories of the old settlement and was glad he and his neighbor were able to show their respect to the people who once lived on their land. This cemetery was in better condition than I anticipated. 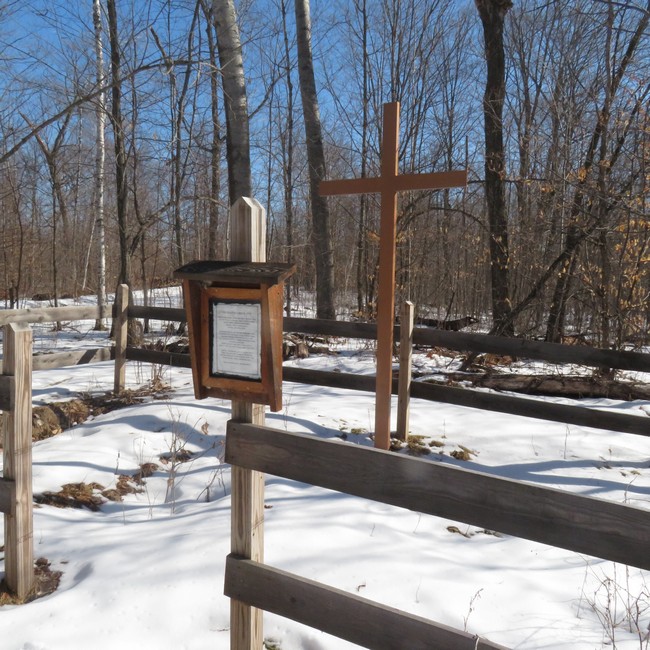 A beautiful wood rail fence had been constructed around four sunken graves. At the entrance to the cemetery, a wooden frame held a sign explaining possible cemetery residents. The sun lit up the graves and I saw a few slight depressions outside the fence. It is possible more graves are outside the fenced in area. Workman provided me with the name and phone nuber of the property’s owner and encouraged me to call him this summer. I promised to do so after conducting more research.

The Aitkin County Historical Society has multiple binders of information on the BlackS ettlement, including burial records. When I visited them in 2016, some of the records said people were buried in Maples. I assumed that meant under maple trees in the Black/Strader Cemetery. I realize now that I need to review those pages and cross reference them with my earlier notes. I believe there are 6-8 people buried in Maples Cemetery!

I contacted one of the descendants of the Black settlers and shared my findings. She was delighted to hear the second cemetery was located and we both agreed that her family is probably buried in it. I’ll never know for certain who is buried in each cemetery. There is only one headstone marking Joseph Henry’s grave in the first cemetery.

Over a dozen more burials are recorded and bodies were occasionally reinterred to the Aitkin cemetery. For now, the two cemeteries hold the names of their residents like a century old secret waiting to be revealed. In time, I hope to hear the whisper of the names so I can record them for others who pass by the cemeteries.