THE WATERS OF MILFORD LAKE DANCED IN THE SUNLIGHT. A green dragonfly darted from rail to rail as I crossed the memorial bridge. Nearby, a woodpecker pounded his head on a birch tree. A gentle breeze brought with it the scent of wild roses and purple iris.  How could such beauty thrive on the site of Minnesota’s worst mining accident? My curiosity surged and once again, I went off in search of knowledge buried the past. I discovered out of great sadness and incredible loss, there is now beauty and some peace.

The Milford Mine originally was called the Ida Mae. It was a closed mine with a depth of over 175 feet. Ore mined in the Milford was in great demand during World War I because it contained high amounts of manganese which made for high grade steel. Crosby resident Joan Stefano’s father was in the artillery division overseas and he probably used equipment made from locally mined ore. After the war, Peter Stefano mined at the Milford.  He was relocated in January of 1924 because smells in the mine made him sick. He was considered a lucky miner a month later.  One hundred and fifteen men worked at the Milford Mine, forty-eight of them were below ground at the time of the accident. 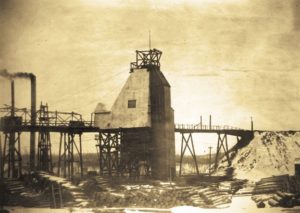 FEBRUARY 5, 1924, BEGAN LIKE EVERY OTHER DAY FOR THE MEN WHO WORKED AT THE MILFORD MINE.

The mine shaft at the Milford Mine, taken in 1924. (Photo courtesy of the Minnesota Historical Society)

The air was cold and the skies were overcast, but the miners knew it would be a balmy 50 degrees at their work stations below. Milka and Peter Magdich were expecting their sixth child in August. As the older children dressed for school, a distraught Milka tried to convince her husband to stay home and away from the mine. She had slept poorly that night and woke from a bad dream, sure danger was lurking in the mine. Peter kissed Milka and said he’d see her later in the day. That was the last time the family saw Peter alive.

At 3:45 p.m., a sudden rush of air caused the miner’s helmet lights to go out. All was dark for a moment until Jacob Ravnik relight his new carbide helmet light. It blew out again and he knew trouble was brewing, so Jacob and his partner ran for the cage, but the electricity was out due to water pouring in, so they climbed the only ladders to safety.

On their way up, they heard skip tender Clinton Harris pull the warning whistle twice to alert miners further away of the impending danger. Ravnik was the first out of the flooding mine alive, only six others followed him through the single shaft to safety.

Fourteen-year-old Frank Hrvartin, Jr. was tall and strong, so no one suspected he was underage. He saved not only his life that day, but also the life of Matt Kangas. Frank, Matt, and Harry Hosford were the last three out of the mine alive. As Matt told the story years later, he recalled the following: Frank urged him to climb the 175-foot ladder faster, but Matt was “all in” and began to stumble. Frank jumped between Matt’s legs and carried him up on his shoulders. Frank pulled his partner Harry from waist-deep water and mud with one hand. When the three broke the surface, they fell to the ground. Water bubbled in the shaft just fifteen feet below them.

The warning whistle blew for four hours until it was cut from above; it was later found tied around Harris’ waist. George H. Crosby, president of the Whitmarsh Mining Company which owned the mine, pledged to the families that the bodies of all their men would be returned to them.

Four pumps were brought in from other locations to drain both the Milford Mine and Foley Lake of over four million cubic feet of water. The first bodies were located six weeks after the accident.

The last body recovered was of Arvid Lehti. He was found Nov. 6, nine months after the disaster. Thirty-seven women became widows that day and eighty-eight children became fatherless. Workers’ compensation, which was enacted in 1913, paid the miners’ wives between $8 and $20 a week for up to seven years. Many of the youngest children quit school before graduation to support their families. For the children, there was great sadness. Not only did they lose their beloved dads, but also the family’s livelihood.

Katie Perpich was born five months after her father drowned in the Milford Mine. Despite her mother remarrying four years later, Katie’s voice cracked as she told me, “It was a hard childhood for many of us.”

The Most Interesting Book Characters